Parenting is a series of choices, and it’s impossible to get it all right, all the time. But when it comes to the big things — like sticking up for your kids no matter what — following your gut instinct on what you think is right is usually the best way to go. This Reddit dad did that recently, choosing to validate his daughter’s feelings over his wife’s, and commenters are calling him a “legend” because of it. 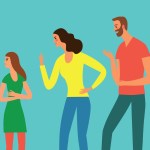 In the “Am I The A—hole?” subreddit, a dad of two opened up about his heartbreaking experience losing his wife and getting re-married. It was all fine at first, but after five months of marriage his new wife is demanding he make his youngest daughter call her “mom,” and it’s all a little weird.

The dad wrote that his wife died “suddenly and unexpectedly” three months after their daughter was born. “I found out after her passing that she’d had a heart condition that she was never made aware of,” he wrote. “I was told to get both my kids tested and both inherited the condition from their mom. That period of my life was traumatic as hell.”

It sounds terrible! Thankfully he had videos and photos to share with his kids to keep their mom’s memory alive, and his late wife’s dad was “amazing and the best grandpa to the kids.”

Two years later, the father began dating a woman who is now his wife. “I have known her for four years and she met my kids once we got more serious but not where we rushed into moving in,” he said, adding that the kids are now 7 and 13 and he’s been married to his current wife for 5 months.

After they got engaged, his now-wife said that “she wanted to be seen as another mom to them.”  But after talking to his kids, he learned that they did not want to call her “mom,” which is definitely understandable.

“My son was clear that she would never be his second mom,” he said. “My daughter said she wasn’t sure but she didn’t feel that way about her. I told them both their feelings were 100% understandable and fine.” What a supportive dad! It’s not even that the kids didn’t Like her, as the dad continued, “They both said they liked my current wife and they thought she was kind.”

For her part, his fiancée at the time seemed fine with it. “I spoke to her about it then and she told me she was fine if they weren’t okay with it at that time,” he wrote. “I told her she needed to be okay with it if they always felt that way. I advised her to be ready to take on the responsibility of being there for them both. She took some time to think and said it was fine.”

But after the ink on the marriage certificate dried, the “evil stepmother” side of his new wife seemed to come out.

“Once our wedding happened she seemed to grow agitated by the lack of mom title from my daughter,” he continued. “I think it bothers her less with my son because of his age, but she has told me she does feel different about it with my daughter, because she is the only mom figure she has known. I suggested we both go to therapy together to work it out. She said it wasn’t needed. That she would get over it.”

Huh … so even though she already said it was fine before they got married, she still has a problem with it. Now, she’s denying couples therapy, once again saying that she would “get over it.” That would be OK — we’re all allowed to process our feelings — but she actually didn’t get over it. Instead, she turned towards her parents to help her get over it.

“[L]ast week she and her parents brought it up to me, how I should encourage my daughter to call her mom and how my daughter deserves to have a mom in this life, how she’ll never know her ‘birth mother’ (which I hate that term for my late wife),” he wrote. Excuse me? In order to win her husband’s approval, she refused to see a therapist and instead bombarded her parents with threats to her husband.  Her Cinderella stepdaughter is witness to Lady Tremaine-level manipulation.

But unlike Cinderella, this little girl’s dad is still in the picture — and he’s fiercely defending his daughter.

“They told me pushing her is the best thing for my daughter,” he continued. “I told them I would never push her to do it. It is important for me to feel like she is at ease in all this. They told me I was putting my kids feelings before my wife’s. I said yes.” Amazing! Of course he’s putting his daughter’s feelings over his wife’s. She is completely unreasonable and he even discussed it with her before they were married.

He added, “They told me I was a shitty husband and a shitty father for denying them both this. My wife’s mother said I was an asshole to string her daughter along. My wife and me needed therapy. I also stated to my wife that our marriage was hanging by a thread. I have doubts about our marriage because of this. The kids do like her a lot and enjoy having her around which makes this suck extra hard.”

Reddit agrees with this man, who stood up for his child despite conflict. One person wrote, “f–king legend.”

“I sincerely hope OP also looked at them like they were stupid when he said ‘Yes,’” another wrote. “Because Truly the gall of these people to expect him to subjugate his child’s emotional needs and growth to his wife’s wants.”

Others pointed out her incompetence in refusing therapy and then inviting her parents to call her husband “misogyny”.

“What kicked me, here she is trying to ‘express’ her feelings and instead of talking to husband and if necessary go to therapy to overcome this, she is calling mommy and daddy to put her husband straight and pressure him to change his mind by allowing her parents insulting him for defending his kids feelings, while they try to convince him that he should respect their kid(wife’s) feeling,” one person wrote. “[OP]’s kids are underage and wife is [an] adult kid who wants to be called mom but invites her parents to solve her marriage problems!” They added, “Your wife is a walking red flag! I wouldn’t be surprised if she, behind your back, starts pressuring your daughter in calling her mom, maybe even again involve her parents to put pressure on her! You have every right to put your foot down and pay extra attention on your daughter’s behavior if you decide to stay with your wife! Good luck!”

This dad was supported by many people for contemplating a divorce. “Good for you for doing the right thing as a father. I’d be past reconsidering the marriage at this point,” one person wrote. “Once someone tries to steamroll my kid’s feelings and well-being, especially for something so selfish, and I can’t ever trust them around my kid again. It’ll be sad to have to end your marriage but it would be even sadder to find out one day years from now from your daughter about all of the things your wife said and pulled behind your back.”

Calling his late wife a “birth mother” was especially insensitive. “It irks me that your current wife refers to your first wife as a ‘birth mother.’ That stings! I hope the kids were not in earshot,” one person wrote.

The dad responded, “It stung for me too, and I can’t put all the reasons into words. It feels like she abandoned her and gave her up to adoption. My wife was an amazing mother. She was an amazing mom. I learned so much from parenting alongside her.”

Commenters also pointed out that “forcing” his kids to call his new wife “mom” would not work out … for anyone.

“And, really, do your wife and in-laws really think you pressuring the little one to use the word is going to magically Make her ‘mom,’” one person wrote. “If your daughter ever agrees to this, it will be on her terms, when she feels ready.”

The dad responded, “That’s exactly how I feel and if she doesn’t, it’s not a negative against my wife, because a great relationship with a stepparent is still an amazing thing. But neither will happen if the whole thing is coerced or forced on her.”

“My son would not give her a special title. I already know this,” he added. “He likes her a lot but he doesn’t love her yet. I’d rather wait and see if my daughter would like to. But as of right now I think we have stuff to work on before that should be considered, given how she is willing to push me on this yet doesn’t want to speak to a therapist.”

The dad found the comments helpful and decided to give his wife an ultimatum.

“I think it might come to telling her it’s therapy or our marriage is over,” he wrote. “I don’t want to do it. Her kids really like her. But I can’t have her put pressure on my daughter and risk putting my daughter in a position she doesn’t deserve to be in. Because she has already gone to her parents over this and included them in what should be something between her and me ultimately.”

It’s so difficult, but it’s so worth it to stand up for your kids regardless of what.

These mom stars talk about raising their children on their own.

Ever wonder our kids’ psychology of money?