by Baby Care News
in Birth
Reading Time: 5 mins read
A A
0


Fetal growth — which is delicate and precisely programmed — may be disrupted by a mother’s exposure to air pollution and psychological stress during early to mid-pregnancy, a new USC study shows.

These findings were published in JAMA Network Open on Tuesday., Protecting pregnant women against air pollution could improve their birth weight, particularly among mothers who live in stressful neighborhoods.

“Although air pollution has a harmful effect on many different populations, our study identified the effects on expectant mothers who are already most vulnerable,” said Zhongzheng “Jason” Niu, postdoctoral scholar and research associate at the Keck School of Medicine of USC and the study’s first author.

“The addition of high perceived stress is another factor contributing to this issue. Air pollution has been linked to future disease risk and low birth weight. Protecting pregnant women from these risks would ultimately protect future generations.”

Low birth weight newborns are at greater risk for neonatal death and other complications, such as bleeding in the brain and jaundice. Low birth weight is associated with long-term health risks such as diabetes, heart disease (high blood pressure), metabolic syndrome, obesity, and intellectual and developmental disabilities.

Data from 628 predominantly low-income Hispanic women pregnant with a single baby was collected between 2015 to 2021 as part of USC’s MADRES (Maternal and Developmental Risks from Environmental and Social Stressors) Center. 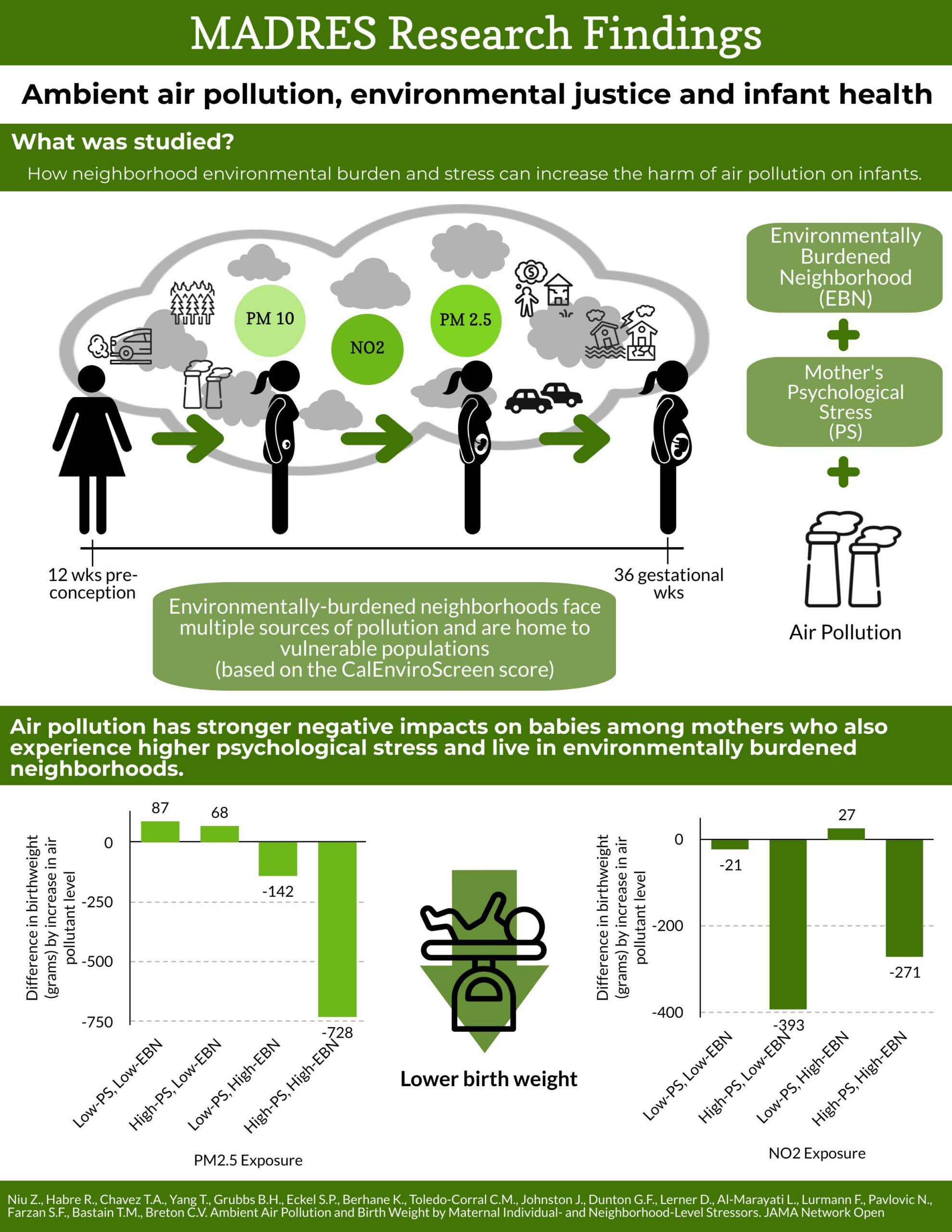 Patients were recruited from Eisner Health in Los Angeles, and the Los Angeles County+USC Medical Center prenatal center. During clinic visits, biospecimen data and medical records were collected. Participants were asked to complete a Perceived Stress Scale questionnaire in order to assess their stress perceptions. CalEnviroScreen Score was used to measure neighborhood-level stressor. This is a California state screening tool that identifies neighborhoods most affected by multiple sources and vulnerability.

Participants were 28 years old on average. 73% identified themselves as Hispanic, while 32% listed Spanish to be their preferred language. One-third of mothers said they were experiencing high levels of stress. The majority of participants were in neighborhoods with CalEnviroScreen Scores greater than 50. This indicates a high cumulative burden.

Microscopic particles could pose a threat to developing babies

The three components of polluted atmosphere were evaluated: NO2, PM10, and PM2.5. Levels of the pollutants were monitored from ambient air quality data (U.S. Environmental Protection Agency Air Quality System) with an average of four monitoring stations within about 5 to 9 miles of each participant’s residential address.

Emissions from the combustion of gasoline, oil, diesel fuel or wood produce particles of PM2.5, which have a diameter of 2.5 micrometers or less — 30 times smaller than a strand of hair. PM10, which has a diameter less than 10 millimeters, can be found in dust or smoke.

Another pollutant that is released at high temperatures from fossil fuels is NO2, nitrogen dioxide.

Daily estimates of 24-hour average NO2 and particulate matter were assigned to each participant’s residential location, from 12 weeks before conception to 36 weeks into pregnancy.

Research has shown that lower birth weight was associated with higher levels of nitrogen dioxide and particulate matter in pregnancy. On average, birth weight was 9.5 grams lower each interquartile range increase (4 µg/m3) of PM2.5 exposure during the 14- to 22-week gestational period.

Further concerning is the fact that mothers living in environmentally disadvantaged areas and with high stress scores experienced higher birth weight drops. These babies were born to mothers with the highest PM2.5 levels from four to twenty weeks. They weighed 34 grams or 1 ounce less than their mothers. Mothers who were exposed at nine to fourteen weeks gestational week to the highest PM10 levels delivered 39.4 grams more.

Despite reductions in air pollution in California, we are still seeing harmful effects of air pollutants on birth weight … in vulnerable populations.

“Despite reductions in air pollution in California, we are still seeing harmful effects of air pollutants on birth weight, a key indicator of baby’s future health, in vulnerable populations,” said last author Carrie Breton, a professor of population and public health sciences at the Keck School of Medicine. “The most vulnerable women are those who are hit with multiple types of stressors, and experience stress in different ways. The combination of stressors and pollutants is important to consider in protecting babies’ health. Monitoring air pollutants must be maintained as a priority. Reducing individual and neighborhood stressors should also be a priority, particularly at the policy level.”