For the second year running, Mumbai, India’s most populous city, has witnessed a slump in live births.

The uncertainty associated with a global pandemic and its impacts on families’ economic circumstances are deemed as the most likely reasons for a fall in the total number of live births in the city. Another factor is the large outmigration of people from Mumbai, which is space-starved Mumbai.

However, there is some hope that 2022 will see a slight increase in live births. Mumbai has had 94,117 live babies this year, according to September data.

Many demographers have seen similar declines in many countries, even those in advanced nations like the United States. “When a new disease outbreaks, people panic, which has emotional and financial repercussions. So, though, they don’t forego childbearing, they delay it until the situation improves,” said Dr Soumitra Ghosh from School of Health Systems Studies, TISS.

“The same happened during the Covid-19 pandemic when a large number of people sustained economic loss, including losing jobs,” he added. 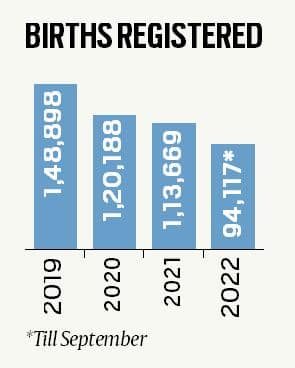 According to experts, such a “baby bust” was also witnessed after catastrophic events such as the 2008 financial crisis and the 1918 influenza pandemic.

These areas also host the migrant community. The first national lockdown saw thousands of migrants fleeing the city, many of them pregnant women. Although many men returned to their homes in 2021 due to flattening the pandemic curve’s trend, many women have fled the country with their husbands.

“We have witnessed a drastic drop in the deliveries in slums. We believe that as many migrant mothers haven’t returned, the live birth rate remained low even in 2021,” said Dr Mangala Gomare, BMC’s executive health officer.

Many pregnant mothers chose to have home births with midwives in Mumbai, especially in slums. This was in order to avoid the need to go to hospital and to protect themselves from the second Covid-19 wave. BMC data showed that home deliveries in 2019 were 353 and decreased to 256 by 2020. In 2021, however, it was 420.

“In 2021, the impact of the second wave was much severe. Although the lockdown was more restrictive than that of the second wave in 2020 and had better access to hospitals to help, many couples avoided planned pregnancies because they were afraid of Covid-19. Thus, we witnessed fewer births and abortions,” said Dr Arun Nayak, gynocologist from Sion hospital, which record the highest annual deliveries.