Imagine this: A cold, snowy, and sleety morning, when the children have spent too much time playing video games (Mariokart in my home) because they’ve exhausted all of the other activities that you (or they!) could think of. It’s easy to see.

Picture this: you, as the parent, are able to release some of the guilt you feel over the amount of time they’ve spent staring at a screen and clicking buttons. Harder to picture, right — at least for me. Screen time guilt is a constant in my parenting. Maybe not for too long.

A recent study published by the University of Vermont’s department of psychiatry found that playing video games could be beneficial to kids’ brains, particularly in the areas of impulse control and memory.

In the study, which analyzed data from more than 2,000 children ages 9 and 10, researchers compared kids who played for three or more hours per day against kids who didn’t play at all. Tests that assessed impulse control and ability to remember information showed that gamers scored better.  The results were confirmed by MRI brain imaging. The gamers showed “higher brain activity in regions of the brain associated with attention and memory” as compared to the non-gamers. The same was true for regions of the brain associated with “more cognitively demanding tasks.”

Researchers were optimistic about their findings, though they recognized the study’s results were limited. The scientists couldn’t establish cause and effect — meaning it was unclear whether the video games themselves caused the cognitive benefits, or if kids with higher brain function in these areas simply gravitated toward video game playing. Either way, the results are “encouraging,” said Bader Chaarani, Ph.D., assistant professor of psychiatry at the University of Vermont and the lead author on the study, who noted, “[I]t is crucial that we better understand both the positive and negative impact that such games may have.”

Not only is the study from Vermont to show that video games may not be as harmful as we thought. Video game play has some other benefits that are worth noting. 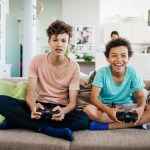 A new study suggests that video games might be better for kids brains than we thought.

The American Psychological Association (APA), in a 2013 review of all research related to video games found that adolescents who played role-playing games more often had better problem-solving skills. They also showed an increase in creativity.

In the same study, researchers found that quick and easy-to-access games like “Angry Birds” can improve mood, keep anxiety at bay, and help with relaxation. Lead study author Isabela Granic, Ph.D. noted that, “If playing video games simply makes people happier, this seems to be a fundamental emotional benefit to consider.”

When we think of video games, we often think that they are lonely, isolated, or anti-social. That’s not the case. In an article discussing the 2013 study, the American Psychological Association confirmed that “More than 70 percent of gamers play with a friend, and millions of people worldwide participate in massive virtual worlds through video games.”

These virtual communities promote social and cooperative behavior. A 2015 study out of Texas Tech even found that “playing video games cooperatively with others can lead to widespread benefits by making players think helpful behaviors are valuable and commonplace.” This was true even when the game was violent — the cooperation decreased the level of aggression players demonstrated.

The American Journal of Play published a 2014 article that compiled all of the research about the benefits of playing video games. The list included improved spatial navigation and tracking of objects as well as improvements in executive function.

“This has critical implications for education and career development, as previous research has established the power of spatial skills for achievement in science, technology, engineering and mathematics,” said Granic.

Video games have long gotten a bad rap — but the more we learn about video games, the more we’re beginning to see that there are some benefits of video games. You could argue that there are many benefits. Of course, those benefits don’t entirely negate the dangers, which have also been studied and widely discussed. They are just there alongside them. This means that parents may have to try and find some balance.

Now, if only that balance was easier to find on those days when we’re all snowed in, bored, and out of creative ideas. Until it is, I’ll just have to make myself at home next to the kids — and call “next” for a spin around the Mario Kart track.

Researchers find 2.8% of pregnancies were exposed to opioids