by Baby Care News
in Birth
Reading Time: 6 mins read
A A
0


Terry Coldwell of EAST 17 has given birth to a daughter and is now a father to six, just in time for Christmas.

After Faye Satterley, his wife, gave birth to their sixth child on December 17, the 90’s boyband member, he added another child.

Terry, 48 was part of the original East 17 lineup, which consisted of him, Tony Mortimer, Terry Harvey and John Hendy.

Terry’s spokesperson stated that Terry is thrilled about the birth of his sixth child, and was “over the moon” with it.

“The baby weighed 6lbs 6oz. Mother and baby are doing well. They are now at home.”

Terry, Robbie Craig and Joe Livermore have all joined Terry as East 17 since the group’s disbandment. 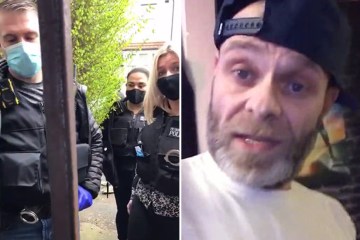 The trio recently appeared on stage as part of their Stay Another Day Tour.

Despite having a growing family, Terry hasn’t just been performing.

He was recently seen on Never Mind The Buzzcocks 2022 Christmas Special, and next week he will be on The Lateish Show featuring Mo Gilligan in the series’ festive Special.

The newly formed group released a new single “I Just Wanna” in May and Terry recently collaborated with Marks & Spencer, appearing in a cameo for the store’s song, “This is not just another Christmas song”.

Posting to Instagram, the star wrote: “Hi friends,Today M&S Team Romford are back with a Christmas song.

“This is not another Christmas song and I have a cameo in their music video( inspired by stay another day)please download on iTunes today and help get this to number 1,all profits will be donated to local Romford charity”.

Despite his social media being music-focused, Terry posted an adorable photo holding hands with two of his children back in May, with the caption: “Me and my mini meeees”.

Terry was the subject of a shocking scene at Dusseldorf Airport in 2017, in which a knifeman held an oversized 10-inch blade to Terry’s stomach.

The fearful musician recorded the incident as he was confronted by ten police officers while he held a hunting knife.

On the terrible event, he said: “It’s terrifying.” After all the terrorist attacks that occurred recently, it was hard not to think of the worst.

“He held the huge hunting knife to his stomach like he was about to inflict serious injury on himself.

“The police tried to calm him down by gesturing for him with a knife to be placed on the ground.”